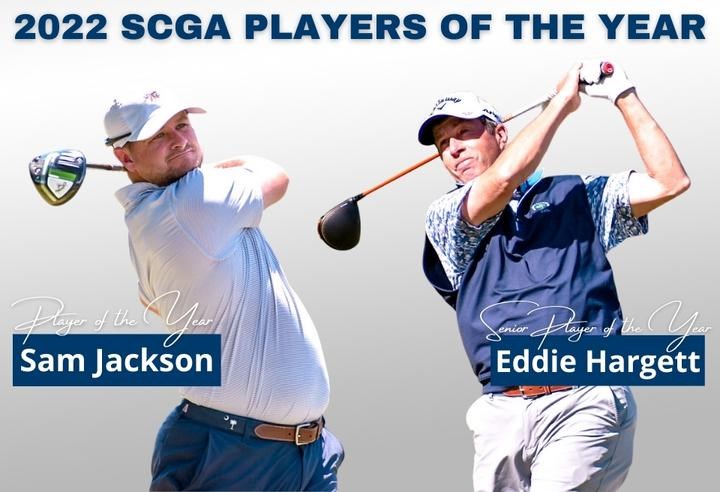 Jackson and Hargett Named 2022 SCGA Players of the Year

A 2015 Presbyterian College graduate and alumni of the men’s golf team, Sam Jackson finished the season with 290.42 points to be named the 2022 SCGA Player of the Year.

Competing in 11 events overall this year, the highlight of Jackson’s SCGA season was his first-place win with partner, Zach Herold of Lexington at the 2022 SCGA Partners Championship.

Qualifying to compete on one of the largest stages in amateur golf, Jackson excelled at the 41st U.S. Mid-Amateur Championship making it to the round of 32.

Overall, Jackson enjoyed six finishes within the top-five this year and competed on the 2022 SCGA Palmetto Cup team.

This is Jackson's first time to be named SCGA Player of the Year.

“It’s pretty fulfilling to win SCGA Player of the Year to be honest,” said Jackson. “I got off to a pretty good start at the beginning of the year with me and Zach winning the Partners and then we also medaled at the state Four-Ball. Having my name added to such a long list of accomplished players is easily the coolest part about winning Player of the Year and something you can’t ever take away.”

Hargett competed in 14 total events this year and had nine impressive finishes within the top-five.

“Obviously, I am very proud to win this award,” said Hargett. “This is a very competitive state and every year there are a lot of new guys that start playing, so I am proud of the consistency I have shown over the years. To be in the company of all the folks that have achieved this means a lot and gives me a lot of confidence going into an event and helps me feel like I can be competitive. There are a lot of great names on the list, and I’ve known Rick (Cloninger) for years and think the world of him, so I’m really happy to be in the same atmosphere as him.”